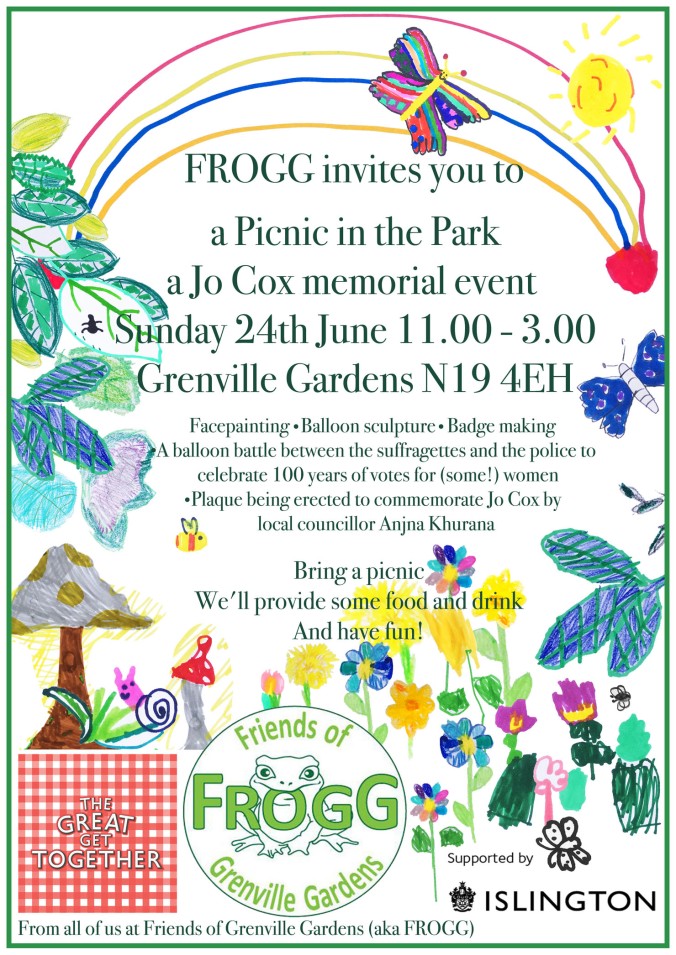 Hope to see everyone there 😀

We have some dates of upcoming events in Grenville Gardens, hope to see you there 😀

Dates For Your Diary

All events are free and we provide equipment too!

Hope to see everyone soon 😀 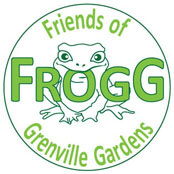 Grenville Gardens in Grenville Road, N19 4EH has been recognised by the Green Flag Award Scheme as one of the very best in the world.

The park  is among a record-breaking 1,797 UK parks and green spaces that will today receive a prestigious  Green Flag Community Award – the mark of a quality park or green space.

This international award, now into its third decade, is a sign to the public that the space boasts the highest possible environmental standards, is beautifully maintained and has excellent visitor facilities.

Grenville Gardens has been a children’s play park  for many years but from 2011 a Friends of Group was formed with the help of Islington Council, London.  Together FROGG (Friends of Grenville Gardens) and the council have upgraded and improved the area.  In 2012 a community veg box scheme was designed and built which then appeared as part of London Open House in 2013 and 2014.

Chair of FROGG, Sarah Roth said: “We are absolutely delighted to receive a Green Flag Community Award for the first time (the only park in Islington this year) and to be one of only 273 parks nationwide receiving this honour.

“We know how much quality green spaces matter to residents and visitors, and this award celebrates the dedication that goes into maintaining Grenville Gardens to such a high standard.

“The park has become much loved as a local gathering place for families and residents.  Veg box holders  have had fun learning how to grow their own veg.  Everyone agrees it has made a real difference to the sociability and pride in their neighbourhood.”

“Each flag is a celebration of the thousands of staff and volunteers who work tirelessly to maintain the high standards demanded by the Green Flag Award. The success of the scheme, especially in these challenging times, demonstrates just how much parks matter to people.”

FROGG held a very successful event in honour of Jo Cox on 18 June.  Leader of Islington Council Richard Watts planted a white rose.  A flag raising event is being planned as well as bulb planting and other activities. 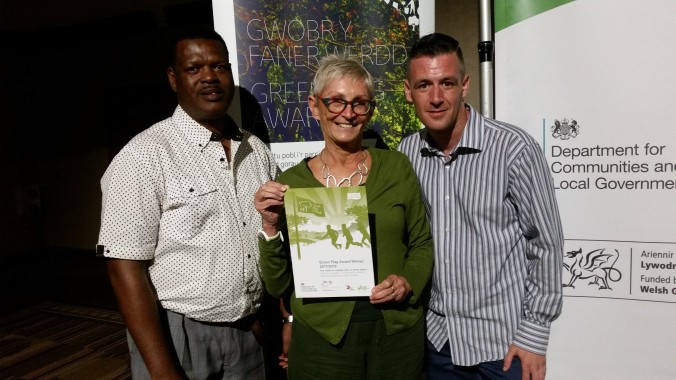 We won the Green Flag Award!!!

We’re the only park in Islington to receive this Community Award 😀
Congratulations to everyone involved, will post the press release as soon as I get it

We thought at the picnic that people might like to share all kinds of delights and info, not just on gardening, and this Pavlova was so scrumptious that we all agreed it should be included. So here it is…

Eggs must be room temperature. Make sure the bowl and utensils are completely dry and grease free, and separating whites do them one at a time so if any yolk gets in you can discard just 1 egg and not all of them (there must not be ANY yolk in the whites):

6 eggs whites, beat them until peaks form, slowly add 1 1/2 cups of caster sugar, it can take ages but let it keep mixing and then when done add 1 teaspoon of vanilla, 1 teaspoon of white vinegar, 1 tablespoon of cornflour. Quickly beat (very quick). Spread onto greased foil or baking sheet, making sure the sides are higher (to hold fruit and cream).

Put in oven at 200c for 10 mins, then turn oven to 110c for one hour. Then turn oven off and do not open the oven door.Leave in the oven to cool, even overnight is fine.

🙂 A big Thank You To Rebecca and Gail for the recipe 🙂

We would just like to thank everyone that came out for the memorial picnic yesterday, it was a lot of fun for everyone, adults and children alike. We would also like to share some of the photo’s our ‘Tech Girl’ took on the day, along with some from the lovely Sky Crockford. 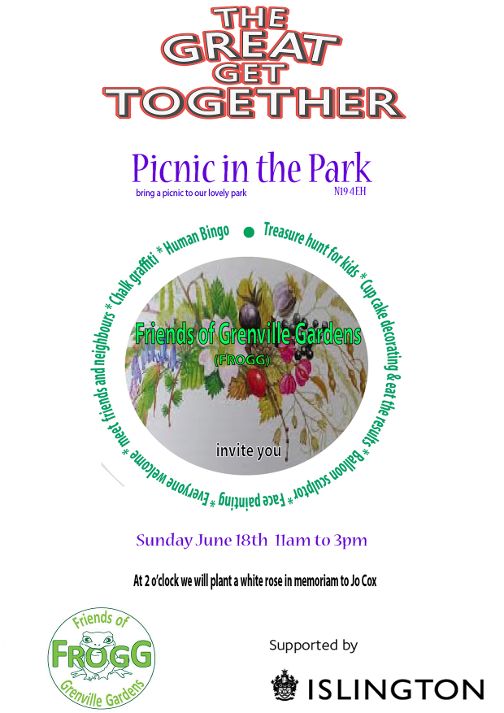 A short walk around Grenville Gardens on a summer day… 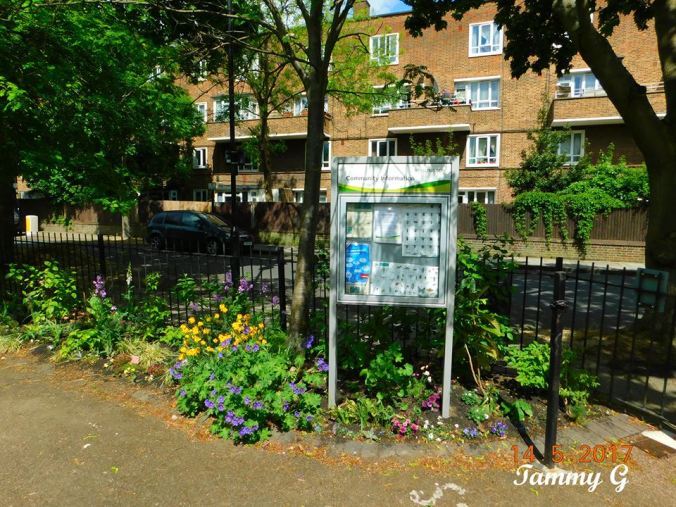 main entrance on the corner of Ormond Road and Grenville Road N19.

From the main entrance 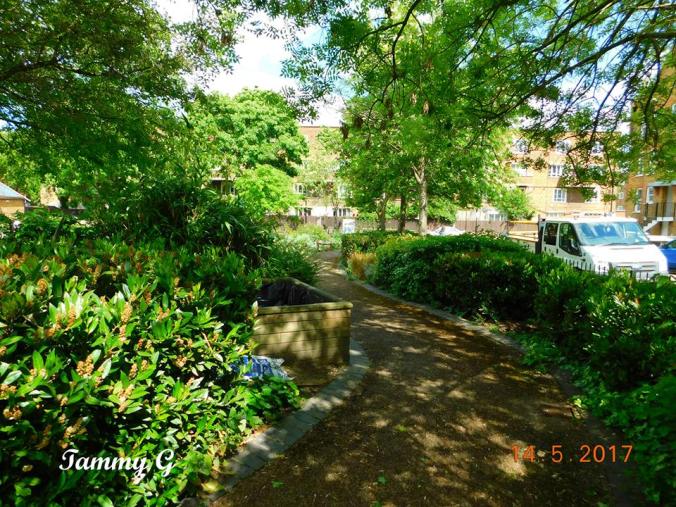 From the entrance on Grenville Road

We hope you enjoy the park 🙂

As the title says, Welcome to Frogg!

Frogg, or The Friends of Grenville Gardens, are a group of volunteers that help to maintain a public park and gardens which has been redeveloped for the benefit of the local community, to include a renovated children’s play area and opportunities for community gardening, including accessible raised beds for vegetable growing.

We hope you come and join us and enjoy the park.

Where to find us